The idea for a Global Research Forum on Sustainable Production and Consumption ultimately goes back to the 1992 Earth Summit, which not only identified a range of objectives and activities involving governments, business and civil society, but also the need to support these efforts through research.  Technologies were to be studied, databases created to collect information on production and consumption patterns, methodologies developed to analyze those patterns, and new concepts and measures developed to translate that knowledge into improved policies and practices.

Following Rio, various research initiatives were launched and new knowledge and ideas generated.  However, when world leaders came together in Johannesburg to review their progress, they faced the fact that the improvements in technology, public awareness and behavior had been overridden by overall increases in consumption and production.  A new topic was added to the research agenda – the nature of the “implementation gap” and how to overcome it.

In response to this challenge, the World Summit on Sustainable Development announced that Sustainable Consumption and Production was an overriding objective of sustainable development and called for a “10 year Framework of Programs in support of National and Regional initiatives.”  However, the mandate did not specify the programs to be developed.   Read more... 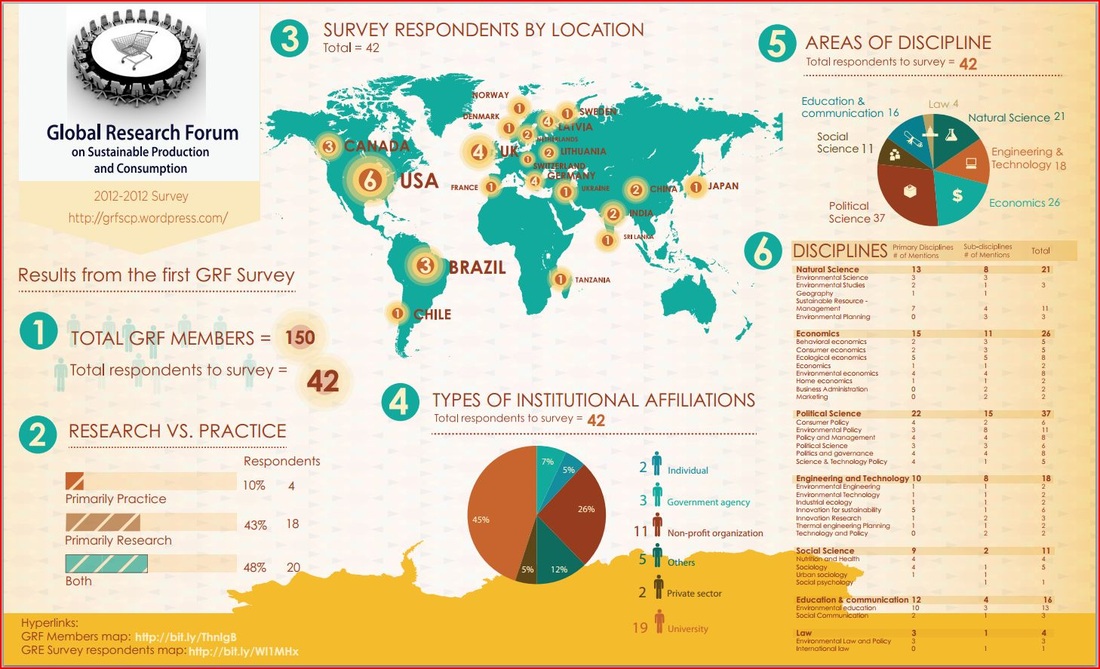 Today, the Global Research Forum on Sustainable Production and Consumption has more than 150 members from over 20 countries, with expertise in fields spanning the natural sciences, economics, education, engineering and technology, and the social sciences.  The membership has ties to institutions and organisations around the world, from government agencies to non-profits, universities, and private sector firms, allowing GRF to leverage multiple stakeholders and experts to contribute to the growing body of SPC knowledge.  A unique feature of GRF's membership is the nearly even split between practitioners and researchers, which gives GRF the ability to identify, discuss, and formulate technical and policy solutions to the complex problems of the modern consumption and production system.

GRF Mission
The mission of the Global Research Forum on Sustainable Production and Consumption is to strengthen the community of researchers and practitioners engaged in research on the worldwide transition to sustainable production and consumption systems.

GRF Vision
The Global Research Forum on Sustainable Production and Consumption was created by and for the community of researchers and practitioners engaged in research on the worldwide transition to  sustainable production and consumption systems.  GRF-SPC strives to develop and strengthen methods of fundamental and applied research to achieve a deeper understanding of the possibilities and barriers to systemic change.  Its ultimate goal is to enhance development and adoption of production and consumption policies, practices and systems which meet basic needs - especially of the poor and vulnerable - and provide prosperity, while conserving natural resources and protecting the environment.