The Global Research Forum in Central and Eastern Europe 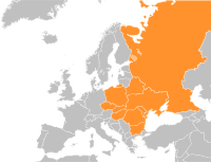 Absolute decoupling of economic growth from CO2 emissions during the last 20 years has been achieved in most of the countries of Central and Eastern Europe (CEE). Western Europe in the same time are striving with relative decoupling during the past decades. However, due to the increasing material wealth (consumption) and ‘rebound effects’, it is unlikely that absolute resource use in the Baltic see region be reduced in the long term. This leads us to the conclusion that sustainability of current consumption and production systems may have to be critically reviewed.

In Europe, many networks, conferences, and publications have focused on sustainable consumption and production (SCP). Most of these activities are concentrated in the more wealthy North-West European countries, including Scandinavia. In southern Europe, recently a Degrowth movement has taken off. However, little or nothing in relation to SCP is happening in the region of FSU.

However, SCP takes a completely different form from the perspective of the (over)developed countries, as compared to the countries in transition where economic development is perceived to be the way out of poverty and western lifestyles are a model for good life. Some argue that the economically advanced countries should exemplify a different vision of a sustainable society in order to inspire a different development path. However, this is not happening yet on any significant scale.

In this situation, CEE could play a very interesting role. These countries are far from overdeveloped, yet they are firmly on their way to follow the richer EU countries. At the same time they suffer from the global crisis, from globalization in general, and have big problems of finding sustainable solutions for development. Consumption levels are still relatively low, and also well-being is rather low; the question is if the NW model is the right solution or CEE should find its own way leading towards a different consumption and development model.

There seems to be a gap between traditional economic development theories, both for local and global development; concepts of sustainable development; and the role of sustainable consumption. In the context of the rapidly unfolding multiple systemic crisis (financial crises, peak oil, inequity, and climate change) the CEE countries are in a unique position to develop an alternative sustainable development vision and model; trying to escape the mistakes of the overdeveloped NW, while capitalizing on their unique inheritance (European culture, some longing for past communist achievements of low-cost education, health care, and housing etc); backlashes from purely capitalist developments; experiences with globalization.

Istanbul Workshop, June 4, 2013
SCORAI Europe convened a one-day workshop titled “Bridging Across Communities and Cultures Towards Sustainable Consumption”, taking place directly before the 2013 ERSCP-EMSU at Bogaziçi University in Istanbul. In paper submissions and lively discussions participants explored how we can better comprehend existing changes towards more sustainable forms of consumption, as well as how such efforts could be replicated across different communities and cultures. We took a broad reading of “communities and cultures” to include varying geographic and social contexts, but also different types of interest groups, from the business community to civil society, from households to the public sector. Proceedings of the workshop can be found here: http://scorai.org/wp-content/uploads/SCORAI-Europe_Istanbul-Workshop_Proceedings_July2013.pdf
Detailed information on the four conferences, including Proceedings, is available from the following links:

The conferences in 2009 and 2011 were supported by the Norwegian Financial Mechanism (Norway Grants) in the framework of a large research project on sustainable consumption. More information on this project is available from http://www.sustainable.consumption.uni-corvinus.hu/index.php?id=25222.

A trio of papers were published in the Journal of Cleaner Production's in May, June, and July of 2013 that focused on a set of problems unique to the Central and Eastern European context.  These papers grew out of the GRF-SPaC's first Biennial Conference, held June 13 - 15, 2012, in Rio de Janeiro.

Abstract
Sustainable residential energy consumption involves a complex, socially embedded and socially constructed market. A system dynamics approach has been used to explore the short, medium and long term impact of different national consumer-oriented energy efficiency policies in the residential building sector. In this paper the system dynamics model has been validated by a case study using historical data from a subsidy scheme and accompanying policy measures in Latvia. Results obtained by the validity tests showed that the model generated behaviour is consistent with available data and is capable of generating “the right behaviour for the right reasons”. Simulation results show that national energy efficiency goals cannot be met by 2016 and the absence of major consumer-oriented policy tools slows down the diffusion process of energy efficiency projects. It also highlights that system dynamics has a high potential to be used for sustainable end-use energy policy planning at both national and sub-sectoral levels.

Abstract
Unsustainable consumption and production patterns have brought human civilization to the brink of a global disaster. Alteration of these patterns to minimize adverse environmental impacts has become the key question of survival, a question relevant for every country and citizen.

This study is based on statistical data analysis and snap-shot surveys of national experts from non-governmental organizations, reflecting their views and observations, which often differ from official positions of national governments and international organizations. In order to draw conclusions about the possibilities for further development, we analyze various sustainable consumption and production indicators, policy developments, progress achieved and the main challenges behind sustainable consumption and production governance in these countries.

Sustainable consumption and production policy in the countries of the region is fragmented, and none of the countries uses a holistic integrated approach. The influence of the EU seems to be critical for advancing sustainable development principles. However, the EU accession does not address the growth effect, which is the main driver behind increasing environmental pressures related to consumption. There is still a long way to go from this mosaic of policy elements to a coherent policy with adequate institutional support and funding mechanisms.

Abstract
This paper analyses the compatibility of growth and sustainability in the European Union (EU) including a new EU member states from the former Soviet bloc (EU10). The extension of EU borders, financial and technological support stimulated rapid convergence and decreased the socio-economic differences between the old (EU15) and newly accepted EU member states. The transition from a command to a market economy resulted in the remarkable increase in resource efficiency and other positive aspects of sustainability. Along with 1.5 times increased GDP, final energy consumption decreased by 20%, greenhouse gases emissions by 25% and the emissions of acidifying compounds were halved during the period from the collapse of former Soviet bloc to the recent economic crisis. However, the per capita production and consumption in EU10 is still approximately half that of EU15, and further catch-up growth should be expected ensuring that economic and social cohesion is not achieved at the expense of increased environmental impact.