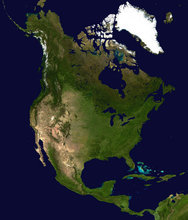 For many people and organization “North America” consists of the two countries of the United States and Canada. [1] This region holds 5% of the world’s population and accounts for 17% of the global ecological footprint. According to the Global Footprint Network, “the average resident of North America has an Ecological Footprint of consumption[2] far higher than the average for any other region.” Since 1961 the American footprint has increased by 160%.

Yet around the world the American consumer lifestyle has been an ideal, a model of the good life and goal of economic development celebrated by a half trillion dollar global advertising industry. Yet for everyone to live like the average American consumer, the natural resources of more than 4.5 Earths are required. North America has a responsibility to set an example by significantly reducing its resource consumption and its production of waste and GHG emissions, to make the transition to sustainable production and consumption systems and to establish a new model and vision of “progress” as well as personal “success.”
[1] The UN Environment Program Regional Office of North America defines “North America” as comprised of the US and Canada. The Commission on Environmental Cooperation (CEC) defines North America as US, Canada and Mexico. The World Atlas and National Geographic, however, define North America as that sub-continental land mass from the arctic circle of northern Canada and Alaska going south to tropical Panama City, covering more than nine and a half million square miles, about 16.5% of the earth’s land area, supporting 529 million people (about 7.5% of the total human population). The US and Canada are considered “Anglo-America.”
[2] 7.9 gha

History of the debate

The debate about “sustainable production and consumption” – the kind of economy and society needed to provide the good life, has deep roots in North American’s history, beginning with the respect for the earth held by the peoples whose ancesters came across the Bering Straits during the last glacial age. In turn, the colonial Puritans held values of “thrift” and looked down on wasteful behavior. In the 19th century writers such as Henry David Thoreau (1817-1862), John Muir (1838-1914), Thornstein Veblen (1857-1929), Ida Tarbell (1857-1944), Sarah Bagley (1805-1895) and others contributed to this discourse on the nature and consequences of our evolving production and consumption systems.

The 20th century saw the emergence of mass production, with the assembly-line of Henry Ford, and mass consumer society, which thrived in the Age of Radio and Television. The end of the 20th century saw the energy crisis, global warming and the consequences of consumerism and a civilization dependent on fossil fuels, highlighted by the Club of Rome report on the Limits to Growth (1972). These trends highlighted the key question for North Americans raised by Canadian economist John Kenneth Galbraith 20 years earlier: How much is enough?  Some began considering alternatives, as noted in Duane Elgin’s book Voluntary Simplicity (1981). The question of “how much is enough” was once again raised by Worldwatch Institute in their 1992 report. This was the year of the Earth Summit, a key turning point in awareness regarding the stakes and responsibility of the industrialized countries, particularly North America and Europe, to address our production/ consumption habits, policies and impacts.

In 1993, following the Earth Summit, the President’s Council on Sustainable Development (PCSD) in the US established the Taskforce on Population and Consumption (1993-1999) to explore the priorities and policies on this topic. During this time Wackernagel and Rees published Our Ecological Footprint (1996), providing one of the essential tools in measuring our consumption impacts. The following year the National Research Council published Environmentally Significant Consumption: Research Directions (1997), aiming to provide a working definition for research and policy. Also that year the Center for a New American Dream was founded to “help Americans to reduce and shift their consumption to improve quality of life, protect the environment, and promote social justice.” This initiative was followed in 2001 by the North American Sustainable Consumption Alliance (NASCA), with the mission “to facilitate information exchange, communication and outreach and collaborative action around sustainable consumption” in the US, Canada and Mexico.

In 2008 the first North American Workshop on Sustainable Consumption and Production was held in Washington, DC, in response to the United Nations call for a “10 Year Framework of Programs” on SCP. The following year saw the launch of the Sustainable Consumption Research and Action Initiative (SCORAI), a “network of professionals working to address challenges at the interface of material consumption, human fulfillment, lifestyle satisfaction, and technological change.” In 2010 these and other organizations launched the North American Roundtable on Sustainable Production and Consumption (NARSPAC), an “evolving multi-stakeholder collaboration bringing together different sectors of society to promote dialogue on practices, policies and programs to advance sustianable production and consumption in the region.”

Many of these organizations and networks also participated in the formation and launch of GRF and now play an active role in advancing research and knowledge of production and consumption in North America and around the globe.